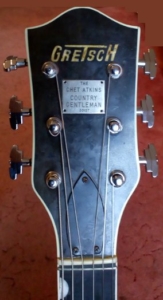 My main guitar is a 1959 Gretsch and I believe it was the first Chet Atkins Country Gentleman imported into the UK (Serial #35157). There’s an interesting story behind how I came to own it.

When I was 17, I worked for Arbiters in London who imported Gretsch guitars from America. We received this guitar from America and I delivered it to a little guitar shop on the Charing Cross Road in London. This big guitar in the window looked so impressive. Whenever I could, I would go into the shop, they would take the guitar out of the window and let me play it. I remember thinking, if only this guitar was mine.

About three months later, Hank Marvin, the lead guitarist from the Shadows bought it. Fast forward to the year 1972, I had stopped playing the guitar professionally and I was doing gardening in Willesden, London and we were laying turf in King Edwards Park. For two weeks it rained incessantly while we worked and I thought to myself I’d had enough of this rain and mud; tomorrow, I’m going to go down to the West End and try and buy a second had guitar and see if I can make a living playing the guitar. 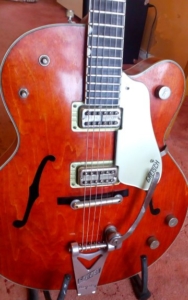 The next morning I went down to a guitar shop called Baldwins guitar shop near Tottenham Court Road Station. The manager, Pete Dyke, an old friend opened the door, I had got there in the morning to be the first customer. I told Pete I was looking for a second hand guitar, Pete said he had just the right guitar for me. He pulled out this lovely guitar case and inside was the 1959 Gretsch. Pete said that last night Hank Marvin had come into the shop and asked to sell it for him.

Going on several years later, there was a radio programme in the UK at Midday called the Gloria Hunniford Radio show. She said that Hank Marvin would be on as a special guest and to phone in if you had an interesting story, so I did. I spoke with Hank Marvin and told him the whole story and he confirmed where he had bought it and where he took it to sell it. I asked him if he had recorded any records with the guitar, he said “Nivram” on the Shadows first solo album, (which is Marvin spelt backwards) and also on the Cliff Richard record “A Girl Like You”.

A transcript of the radio programme can be found on the following site under the section “A Rare Find”: